Icelanders have a long history of telling stories. The Sagas of the Icelanders are widely seen as a forerunner of the modern European novel, written in the thirteenth and fourteenth centuries, and telling the stories of farmers as well as warriors and kings.

Icelanders have storytelling in the blood – apparently one in ten will write a book during the course of their lifetime. On my recent trip to Iceland with Super/Collider, I didn’t experience Icelandic storytelling first hand, but I did get a strong sense of a distinctive Icelandic tone of voice.

It is a tone of voice which is direct, but playful in its directness. On the wing of the Wow Air plane, was the message “This is the west wing”. A little something to make you smile as you look out of the window. 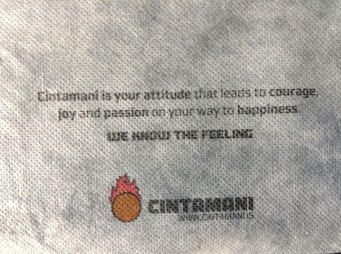 The advertising on the headrests was not for the in-flight peanuts and gin and tonic. It was for the Icelandic clothing company, Cintamani. It read “Cintamani is your attitude that leads to courage, joy and passion on your way to happiness”, and signed off with the strapline “We know the feeling”. What a positive brand message and I really felt that they did know the feeling. That made me warm to them. Again, direct and straightforward in tone of voice.

And then at the first hostel that we stayed at, the Bus Hostel, Reykavik – “Welcome, we like you”. There, on the walls. Starting from a positive. Of course, the employees need to live up to these words with matching friendliness (which they did), but these words must act for an inspiration and reminder for employees as much as a greeting to guests.

We were then out to the raw nature of Iceland so didn’t come across many more brand messages. But experiencing some of the force of the weather that Icelanders have to deal with – in the form of sandstorms and gale force winds that blew out car windows (fortunately not ours) – I began to get a sense of where such a tone of voice might come from. The farmer who owned the hostel where we took shelter in the midst of the gale was direct in his speaking – his words ran along the lines of  “you are safe, that’s the most important thing that matters, why are you worried about your car”, when we tried to ask if there was somewhere else to park it. Fair enough. When you truly are at the mercy of the elements whether wind or volcano, then I imagine that you learn to value what’s important.

“The style in which The Sagas are written is, like some of today’s best fiction, unpretentious and unadorned. Characters move from A to B to C (often by long-boat), and the narrators remain unemotional and impartial; people live and die without sentimentality or judgment. It is up to the reader to provide that.” 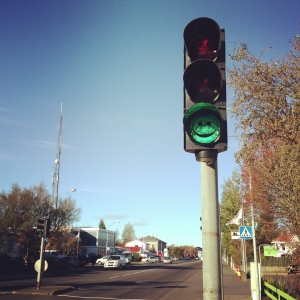 I was also reminded that tone of voice is not just what you say. In Selfoss, the green traffic lights have smiley faces – and the red ones do too.

Leaving Iceland, I was given a final parting line to take away at the airport:

“Without my imagination, I couldn’t go anywhere”.
Vigdis Grimsdottir, Z: A Love Story.

I think my imagination will take me back to the Icelandic landscapes.

Have you come across a tone of voice of a country that has struck you? Please share.